A Slave of the Shadows
By
Naomi Finley 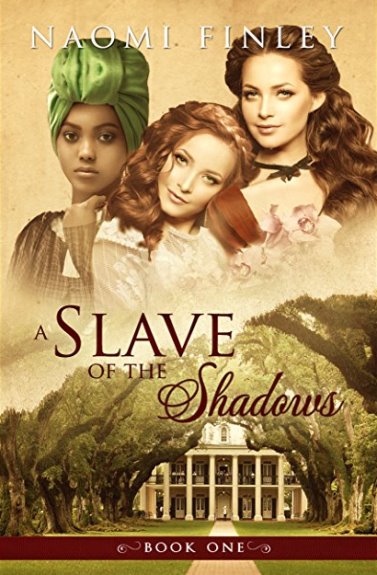 Series: Yes, A Slave of the Shadows Book #1

In 1850 Charleston, South Carolina, brutality and cruelty simmer just under the genteel surface of Southern society. In an era where ladies are considered mere property, beautiful and headstrong Willow Hendricks’ father has filled her life with turmoil, secrets, and lies.

Her father rules her life until she finds a kindred spirit in spunky, outspoken Whitney Barry, a northerner from Boston. Together these Charleston belles are driven to take control of their own lives—and they are plunged into fear and chaos in their quest to fight for the rights of slaves. Against all odds, these feisty women fight to secure freedom and equality for those made powerless and persecuted by a supposedly superior race.

Only when they’ve lost it all do they find a new beginning.

Book 1 presents Willow and Whitney—and the reader—with the hardships the slaves endure at the hands of their white masters.

Review: This is the first book by author Naomi Finley and I have become a loyal reader after reading this book. A Slave of the Shadows is a well-written book with very strong female characters. In a world where one race feels superior to the other females like Willow and Whitney come forward and fight for their rights and equality.

As soon as I started the book I was glued right away to the story. It always gives me the inspiration to read such stories where strong-willed people go against the so-called rules set by people in power and break stereotypes.

The revelation of secrets and surprise factor is on point, especially towards the end. I liked all the characters in the story and the voice that these strong headed ladies put forth.

Surprise Factor: Well, the tension built and the revelation of truth had kept me going.

Would I be reading more from Naomi Finley: Yes, I am looking forward to the next book in the series.

Naomi lives in Northern Alberta. Her love for travel means her suitcase is always on standby while she awaits her next plane ticket and adventure. Her love for history and the Deep South is driven by the several years she spent as a child living in a Tennessee plantation house. She comes from a family of six sisters. She married her high school sweetheart and has two teenage children and two dogs named Ginger and Snaps.

Creativity and passion are the focus of her life. Apart from writing fiction, her interests include interior design, cooking new recipes, throwing lavish dinner parties, movies, health, and fitness.